Muziker is the largest multi-channel retailer of musical instruments in Central and Eastern Europe. Their online store caters to 26 European markets, and the e-commerce presence is supported by a sizeable network of retail stores spread throughout the the main cities of Czech Republic and Slovakia.
Success Story
10.5% revenue uplift across the board achieved by multiple
Call-to-Action weblayers, and retargeting campaigns

With such a diverse, international customer base, Muziker’s top challenge was to find a way to manage effective communication with their customers across a multitude of countries. Determining a new seamless method for emailing was paramount as it was a severe pain point to prepare 17 different newsletters each time a new campaign was to be sent out and follow-ups with clients weren’t performing as desired. 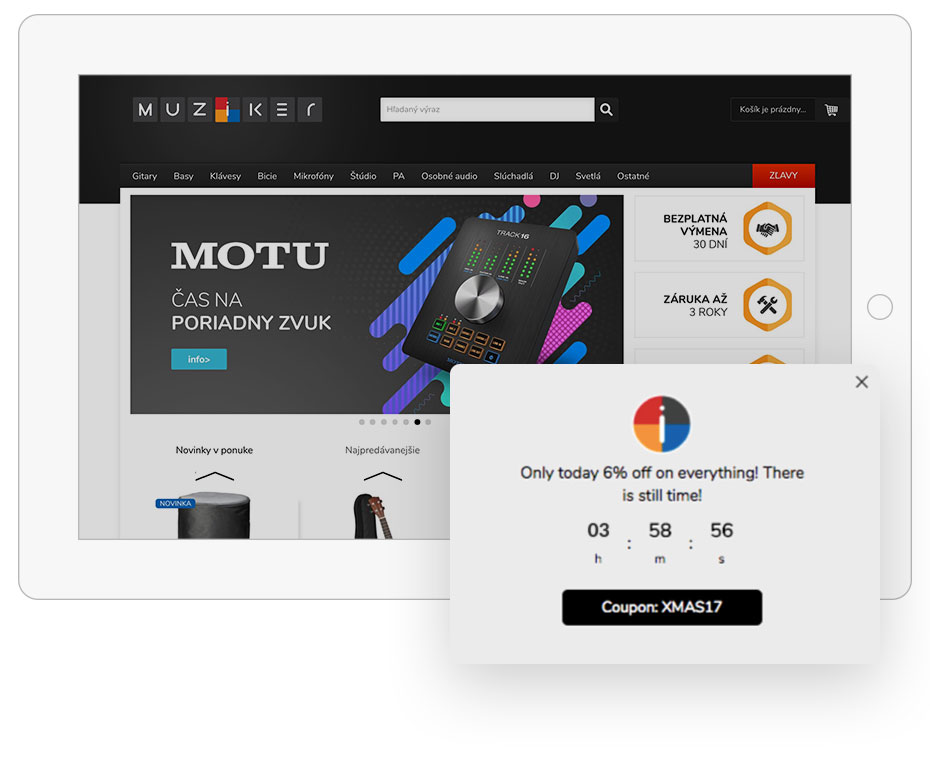 During the initial meetings with Muziker, our goal was to find out the root cause of their problem and to understand which KPIs were the most important to them, so we could set up our cooperation in such a way that it delivers the highly impactful and attainable solution within the timeframe of the pilot.

First things first, we began by integrating Muziker’s data and customer database into Exponea, so we could work our data-driven magic.

What followed was an analysis of the database using Exponea’s deep analytical environment. We formulated a set of hypotheses which, if proven, could be a stepping stone for delivering high value use cases.

The use case with the highest value to time ratio for Muziker was an update of their newsletter campaigns, so our goal was to focus on that first. To make sure that we increased our newsletter deliverability to its peak, we started with the email warmup campaign.

In parallel, our challenge was to prepare a scenario for an automated newsletter campaign in 17 different languages, so we could help Muziker streamline processes and make sure that coordinating so numerous email variants was seamless and with an easily measurable performance.

Black Friday was approaching during the pilot cooperation. And together with Muziker, we felt confident that we could help them deliver stellar value with the use of our AI recommendation features within their special Black Friday newsletter campaigns, so we built a collaborative AI model supported by customers’ past product views and hand pick items. The result was a hyper-personalized newsletter which delivered on its promises.

The last emailing use case that we did during our pilot was the highly detailed abandoned cart automation that would help customers finish their orders. For Muziker we went a step further and created a scenario which A/B tests different variants of prompt emails & various time delays before they’re sent. The scenario itself is built using 25 nodes.

Our next set of use cases were weblayers with our first one being view count weblayer and even though, it’s such a simple use case, it rarely fails to deliver! And in case of Muziker, it was a use case which hit the mark.

The next use case was a countdown weblayer, which was counting down until the end of sales, which created the sense of urgency for Muziker’s customers and the revenue per visit against control group was above expectations. 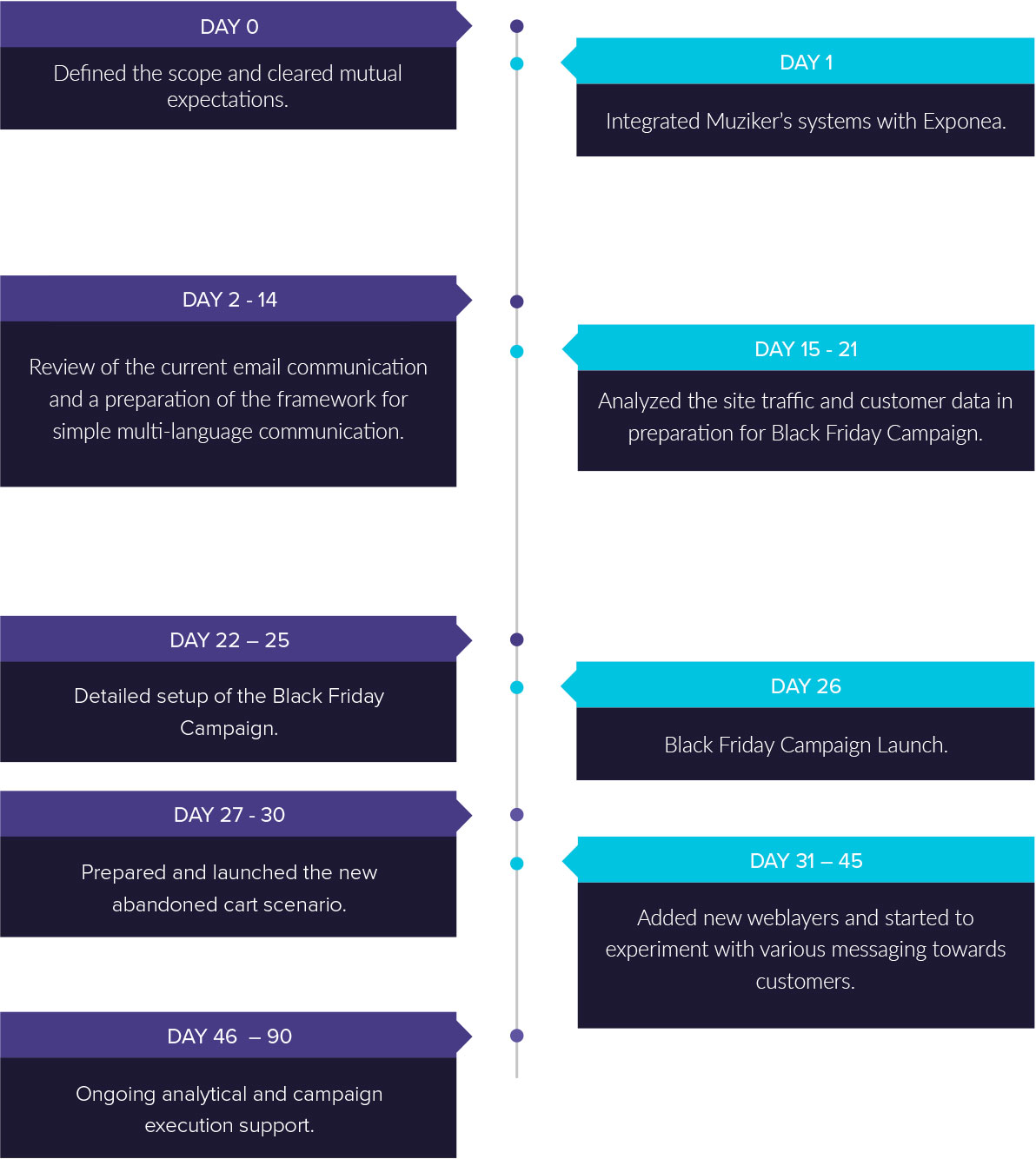 On pages with timer countdown

On special deals “just for you” weblayer

See how companies like yours made it.
Too good to be true? Listen to God's voice.

Topankovo is a leading online retailer specializing in shoes

One of the major European e-Commerce fashion stores.

to include Exponea
in your selection process

Tailored around your high expectations.
Contact us and do more day one.

Why wait? The initial integration of Exponea takes just a few minutes. Our consultants then delve into your data, find actionable insights and deliver the first results in just a few weeks.

It all begins with the customer's first visit and ends with their repeated purchases. Eager to know what happens in between? Get powerful customer insights and act upon them straight away, effortlessly and effectively.

Each and every one of your customers matters. Instead of just giving you a brief audience overview, Exponea delivers everything needed for one-on-one marketing.

E-commerce businesses typically need as many as 12 separate tools to deal with tracking data, building audiences, sending emails etc. Then, there's Exponea that integrates everything into one interface. We call it the Direct Execution Ecosystem.

Reach your customers in the right place at the right time. Exponea is a truly multi-channel platform, where the only limit is one's imagination.

Get the whole
company on board

Exponea makes it easy for departments to work together. Get insights, decide on experiments and celebrate successes and new learnings together.

There's no such thing as two identical businesses. Exponea is ready, allowing everyone to dig as deep as they need and evolving by itself based on how you've been using it.

SHOW ME HOW TO START

Принять
Назад
X
We use cookies to optimize our communication and to enhance your customer experience. We also share information about how you use our website with our third parties including social plugins and analytics. You consent to our use of cookies if you continue to browse our website. You can opt out of our cookie use on the Do not Sell my Personal Information page. For more information please see our Privacy Policy.